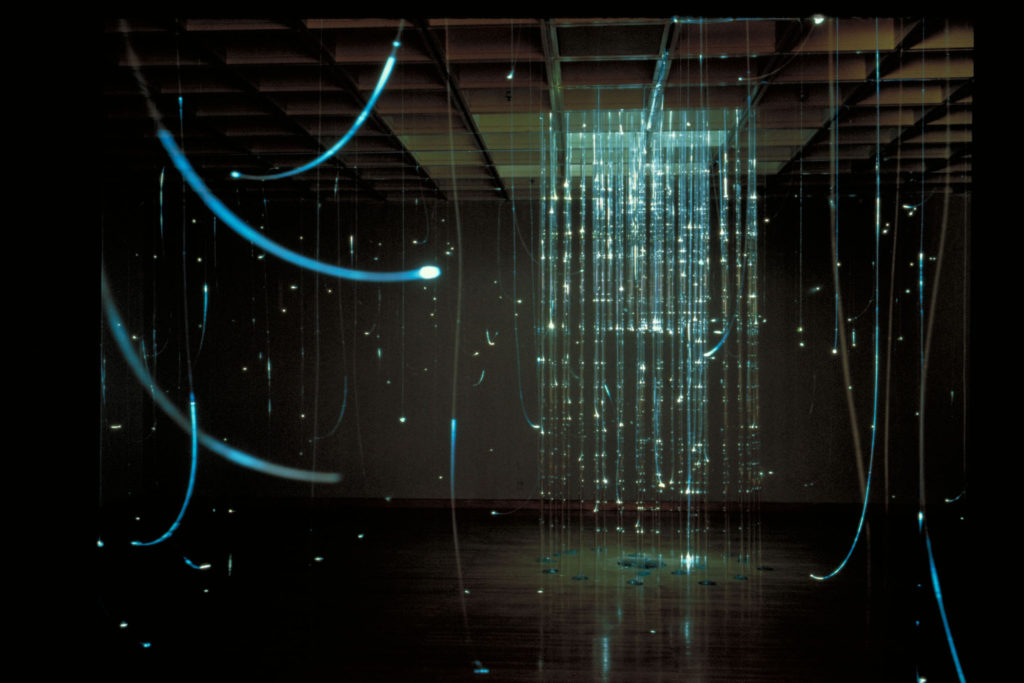 Walking into a living drawing

Critic and MAD museum curator John Perrault invited me to be in the Glass Installations show. There were four men and me. John said, “I know you want the biggest space, Mary.” True, I did.

We all arrived to install. The men brought big crates, workers, and machinery. I arrived with an old-style folding luggage cart holding a small box. The ceiling was a dropped wooden lattice in a grid pattern. I ran fiber optics along the square grids and scraped the edges of the fiber optics so the lines would emit light. In the center of the, gallery, I placed clear glass tubes in a circular pattern; within that circle, I placed a smaller circle, not touching the ground, so a person could imagine fitting under it. Below the tubes were “puddles” of glass as if the center structure were melting. Along the walls, I drew lines mimicking the flowing lines of the hanging fiberoptics.

I wanted viewers to experience two things. The first was to feel as though they were walking into a living drawing. The second was to imagine themselves in the center circle. Just as children find little secret hiding places in the woods, under furniture, in bushes, I wanted viewers to imagine themselves in the center circle and to look at the magic of the room pulsating with light as the fiberoptic lines appeared and then disappeared in random order. It was all white light. The room felt magical and spacious.