The Front Row’s Alison Young spoke with Mary Shaffer as they walked through the exhibition Reflected Light. 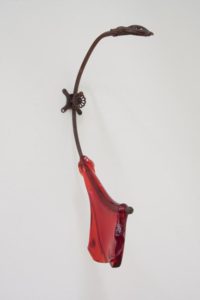 Relatively few new forms of art were invented in the Twentieth Century. One of great significance, though, has been the century-long interest in found objects and their amendation and re-presentation. From Marcel Duchamp to the Surrealists, from Joseph Cornell to Robert Rauschenberg, from Meret Oppenheim to Donald Lipski, and from many many more there has been something particularly alluring about the discovery of something in the ‘real’ world, some object with its own dormant presence and mute history that can be somehow rehabilitated, resuscitated, and returned to the realm of the interesting by the imposition of an artist’s hand and imagination. Mary Shaffer is a lot of things, and, like some of the artists mentioned above, her interests extend in other directions as well. But the exercises in looking that comprise her recent sculpture is surely centered in her sensitive scavenging, in her ability to take what is seemingly beneath notice and release from it new realms of suggestion and meaning. END_OF_DOCUMENT_TOKEN_TO_BE_REPLACED