Mary Shaffer’s sculpture relies on oppositions: soft vs. hard, light vs. dark, clean vs. corroded. But the appearances of her principal materials — glass and metal — are more different than their actual natures. The glass that appears to flow is actually just as solid as the frames, hooks and tongs to which it’s attached. And the processes of making the clear or colored material — hot glass or slumped glass — are as industrial as manufacturing steel.

Reflections and Contradictions: Five Decades, Shaffer’s retrospective at the American University Museum, savors these incongruities. The selection, which dates to 1972, includes pieces in which glass poses as water, fabric or an icicle dripping from a rusted metal wheel. Although the patina emphasizes the bulk and strength of the metal pieces, the glass catches the light, making it appear weightless, mutable and alive.

Shaffer, who works in Texas and New Mexico, started as a painter, and two of her 1970s drawings are included here. There also are In the galleries: Artist’s glass has life of its own four pieces from a series in which undulating clear-glass diamonds bracket simple silver-metal shapes, rare examples of the artist’s work in which glass plays a supporting role. More often, though, it dominates, even when a small dab of the seemingly fluid material is attached to a large metal object. The found industrial pieces suggest the world as it stubbornly is; the glass evokes change, possibility and, well, art.

Relatively few new forms of art were invented in the Twentieth Century. One of great significance, though, has been the century-long interest in found objects and their amendation and re-presentation. From Marcel Duchamp to the Surrealists, from Joseph Cornell to Robert Rauschenberg, from Meret Oppenheim to Donald Lipski, and from many many more there has been something particularly alluring about the discovery of something in the ‘real’ world, some object with its own dormant presence and mute history that can be somehow rehabilitated, resuscitated, and returned to the realm of the interesting by the imposition of an artist’s hand and imagination. Mary Shaffer is a lot of things, and, like some of the artists mentioned above, her interests extend in other directions as well. But the exercises in looking that comprise her recent sculpture is surely centered in her sensitive scavenging, in her ability to take what is seemingly beneath notice and release from it new realms of suggestion and meaning. END_OF_DOCUMENT_TOKEN_TO_BE_REPLACED

People expect “the right tool for the job” to solve any problems, ease any chore and last forever. The measure of a tool’s quality is its ability to keep on functioning even though it is being pushed way beyond its limits.(1) What’s more, because we believe form follows function, we see our tools as endowed with innate beauty. We collect them and put them on display, or we replicate them in fine art materials such as bronze, silver and gold, and then display them that way. Countless modern artists, from Arman to Stankiewicz.(2) have incorporated tools in their work, but few have done so as consistently as Mary Shaffer. Her enormous Tool-Wall in the recent exhibition, “Glass Today by American Studio Artists” at the Museum of Fine Arts, Boston, was the culmination of a career-long, pioneering use of tool in combination with glass. END_OF_DOCUMENT_TOKEN_TO_BE_REPLACED

Marcia Miro Art critic living in Detroit, a contributing editor for Art News and Glass Magazine, among other publications.

Over a decade ago it was already possible to identify three characteristics that made Mary Shaffer’s work innovative: her experimentation with process, creation of new forms, and marriage of process and form with meaning.*

Over the last 12 years Shaffer hasn’t shifted from this innovator’s stance, nor slowed down her production. She continues to develop earlier ideas. Her concepts remain overriding. Her material-plate glass-still leads her, allowing her to make unexpected forms out of chance and controlled occurrence of process.

Yet one must add to the initial ideas of meaning the Shaffer has anchored her glass sculptures contextually, always finding or making a connection between object and place, object and culture, object and science, as well as time. To every found or finished material she appropriates, she adds her context, shifting meaning so what was becomes something different, more highly evolved and revealing. Every sculpture she makes from scratch carries referents, relating to a variety of circumstances. Shaffer has a dogged way of never letting go of these contexts, sometimes repeating an idea over and over in different configurations and scales until she has explored it in every situation she can imagine. In fact, a strength of the work is the freshness her recontextualizing brings. END_OF_DOCUMENT_TOKEN_TO_BE_REPLACED 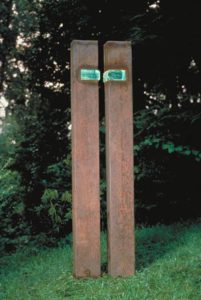 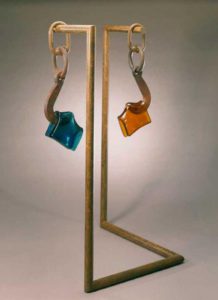 Mary Shaffer’s work is sculpture. But this does not say quite enough in the terms of its unique location within the scheme of things. Although she has been exhibiting her work since 1975 in a gallery primarily devoted to painting and noncraft sculpture (O.K. Harris in New York), she has also shown in glass-specific or craft venues (the Heller Gallery in New York and Anne O’Brian Gallery in Washington, DC). Shaffer belongs to two worlds and is not made uncomfortable by this seeming paradox. Although her works are clearly not vessels, she shares with vesselmakers and other glass artists the difficulties-and pleasures-of working with a material that some consider automatically seductive. What other material captures light so wondrously? What other material can you look into as well as through? END_OF_DOCUMENT_TOKEN_TO_BE_REPLACED