Garbage for your Eye

I Could Have Bought…

Is about the power of opposites

I believed that every point in time was equal to every other and that opposites are similar.

In Rome the construction sites used a green plastic mesh to cover the facades of buildings while work was being done. It was thought to be non-flammable so I decided to burn it up using electronic heating elements, the kind used in electric stoves. I found straight ones that would glow red hot.  Because I was using high voltage the structure of the heating elements had to be done in three phase. 3 phase means that each electric ‘leg’ had to be in balance, or using as much electricity as each of the other two ‘legs’. So it becomes a balanced structure.

“Fire-Laundry” was exhibited at OK Harris in NYC with the electrical structure and a faked electrical box on the wall. I also had a tape recording of the sounds of the non-flammable material burning—it sounded like electronic music. 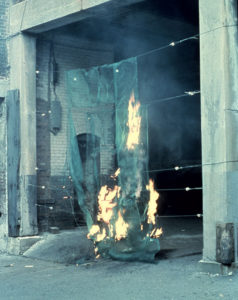